Lesson from my parents’ move (during COVID-19) 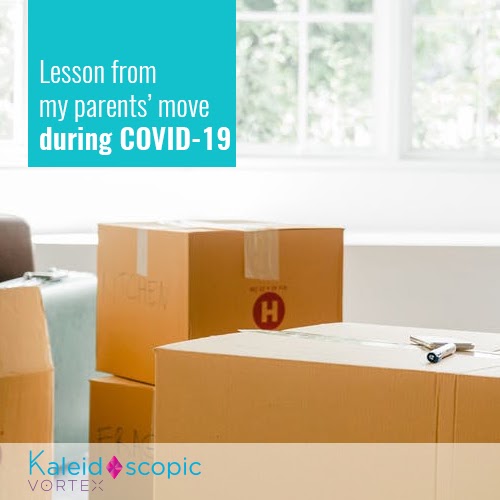 My parents sold their house and moved for the first time in 40 years. I thought I’d give out some tips that would help them. But this move ended up being way different and nothing as we anticipated. Here’s the lesson of it.

My parents sold their house in January 2020 and were scheduled to move in their new apartment in early fall 2020. Guess what happened right after they sold their house: COVID-19. This made of a very unusual move. But here’s some lesson from it.

When my parents made their decision they would move to a senior apartment in the near future, they started to get rid of stuff. Before taking pictures of the house for the listing, they did even more decluttering. Many round of decluttering between January and September (so they could sell stuff at the garage sale).

When you leave a 3-bedroom + basement house to go in a one-bedroom apartment (plus den), you might over estimate the space you will have. They did another round of decluttering when moving in. If it didn’t fit, it can’t sit!

I’m so glad I did. I worked at a manufacturing company at the time and even in November 2019, I started gathering used boxes from the shipping department. I did until we started working from home back in March 2020. At first my parents thought I was a but too early, but still stored the boxes in the basement and in the yard shed. With COVID and no place to get used boxes, I think they were glad I was foresighted. They didn’t had to buy boxes which would have been expensive.

As soon as the house was sold, things that would not be needed were packed up, like Christmas decorations amongst other things. A lot of websites I saw said to pack like a month before. Are you kidding me! Also, their moving company needed an estimate of boxes. Good thing they started packing ASAP because they busted the number of boxes allowed way before one month away from the move. Also, the restrictions got stricter and I couldn’t visit them to help pack. In this situation, packing early was the saviour!

The restriction loosened up and we were able to hold a garage sale. Initially, the sale date was the weekend they were supposed to move, but construction was delayed so it was pushed a month later. This means I could plan a super garage sale in respect of the safety measures. Having lost my job not even a month before that, I put my graphic designer talent to good use. I updated the sign from last year, mentioning it was a moving out sale. I made signs about the public safety guidelines and drew marks and arrows on the driveway to mark 2-meter spots and to indicate the flow direction. We had a table with hydro alcoholic gel to encourage people to use it. As usual, I advertised on Kijiji and Facebook and we had quite a big turnout, considering it was during a pandemic. I guess many people were looking for a barging and were not away on Labour Day weekend. It helped to get rid of a decent number of unwanted things.

Having moved a lot (4 times), I found very useful to make them a list of box numbers and space to write the contents of each box. I also made them a plan of their apartment with colour code. Boxes with a blue dot would go in the bedroom, the one with a red dot in the living room, etc.

My parents had the keys a few days before the move. They took advantage of it and moved the “first night box” I prepared them along with some valuables or breakable. They also brought the poster I made with the colours code along with some hydroalcoolic gel for the movers. My parents were also able to wait outside their apartment, in the common area not to hinder the movers. Even in non-COVID time, 4 (or was it 5) people in their small apartment is too much.